We’ve heard a lot about the opioid epidemic over the last ten years. Books, articles and documentaries have abounded. Analysis of the cause of the problem usually focus on one of several familiar themes: Big pharma, poverty and deprivation, childhood trauma…and so on. But there has been little serious investigation conducted on a macro level. What are the deeper sociological causes of this particular epidemic? Is it different to other drug epidemics? Why now?

My contention, is that there is a link between the increased use of opiates in America and Britain and de-industrialization. In these two countries in particular, rapid industrialization and de-industrialization have caused an identity crisis. It is the rust belt of America that has been hit hardest by opioids. And in the UK — it is the coastal towns, known as ‘brown towns’. These towns and cities earned their name due to the colour of Afghan heroin that is sold there. But they are also full of rust. The common denominator is clear then. In both cases it is post-industrial decline that is the active ingredient.

Let’s look at America first. In 2016, 39 out of 100,000 people in the states of Ohio, New Hampshire and the District of Columbia died of opioid overdoses. In nearby Pennsylvania it was 38, and in West Virginia (the highest death rate in the country) it was a whopping 52. A quick glance at a map of these fatalities reveals that the opioid epidemic has played out with greater intensity in the former industrial areas of the North East than anywhere else. What does this tell us? It tells us that the opioid epidemic doesn’t correlate with poverty. In the North Eastern industrial corridor of the United States poverty is relatively low, but death by opioid overdose is high. Given that jobs in American heavy industry have halved since 1980, it seems likely that the 21st century opioid epidemic correlates much more closely with unemployment than it does poverty. 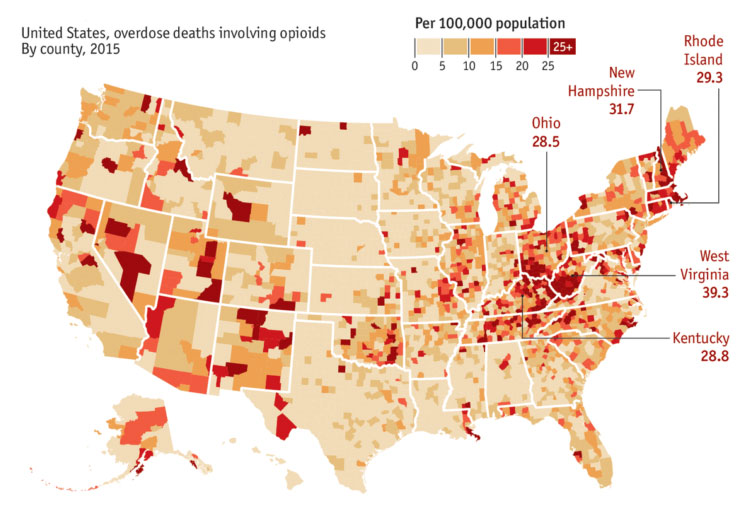 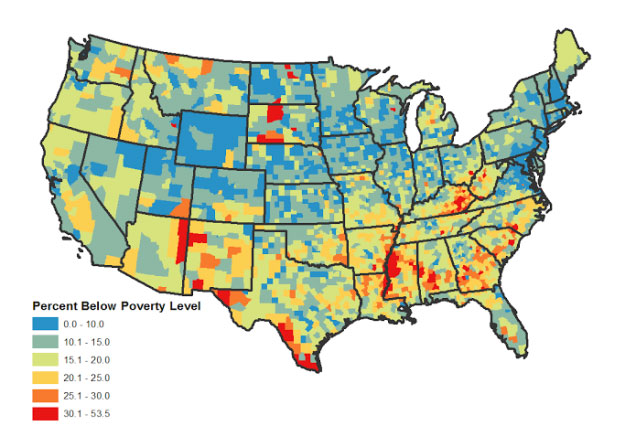 We can see this even more clearly if we look at a map of opioid deaths by county (top) and compare it with a map of poverty by county (bottom). The counties in Utah, Nevada, New Mexico, and Arizona where opioid fatalities are highest, are not the poorest.

In the South, areas of endemic poverty do not have particularly high rates of death by opioid overdose (although they do have high death rates due to obesity and smoking). It seems that different ‘types’ of unemployment have different effects. Sudden mass unemployment in areas where people formerly had financial security and an occupational sense of identity (in mining areas for example) appear to have increased their opioid use more than in areas of long standing poverty, such as native American reservations or parts of the deep south.

In 2014, a UK Home Office report delivered an overview of the historical spread of heroin over England and Wales during the 1980s and 1990s. It found that during the late 1970s there were only a handful of heroin users in the UK, mostly in London, most of whom were middle class. That changed when a new trade route opened up from Afghanistan and Pakistan that delivered smokeable heroin to the UK for the first time. By the mid 1990s heroin users were being counted in the hundreds of thousands (probably around 300,000). In areas like Liverpool some 87% of these heroin users were unemployed.

The researchers also noted that the epidemic spread in two distinct waves. The first wave hit in the early 1980s, and the second wave in the early 1990s. The researchers didn’t provide a theory as to why this happened beyond the usual ‘supply’ hypothesis. Nevertheless, the correlation with industrial decline and unemployment is clear to see.

During the 1980s large swathes of the North of England, Scotland, Wales and Northern Ireland were rapidly de-industrialized. Coalfields, shipyards and manufacturing hubs were permanently decommissioned. A recession hit in 1981 as the government tried to control inflation. Unemployment hit 3 million and did not fall again until the mid- to late-80s. A second recession came in the early-90s as the boom of the late-80s crashed. These two recessions correlate exactly with the two ‘waves’ of the UK heroin epidemic.

A third recession — the 2009 financial crisis — has also caused a recent upsurge in opioid abuse in the UK. As in the US, these overdose hotspots are strongly correlated with industrial decline. These brown towns include many former seaside resorts which have degenerated as tourism has gone abroad, as well as industrial hubs which survived the cull of the 1980’s only to succumb post-2009.

For example, Hastings Bournemouth, and Scarborough are faded seaside resorts which had the third, eighth and fourteenth highest rates of opioid overdose deaths in the UK respectively between 2014 and 2016. Port Talbot, a former centre of heavy industry with a large and busy dock, was fifth on the list. Barrow-in- Furness which made much of the UK’s military hardware until the recent financial crisis, was number eleven. Burnley and Blackburn (both former mill-towns) were second and twelfth, and Reading, Portsmouth and Swansea, which all have a significant, and recent recent industrial past, were forth, seventh and tenth. 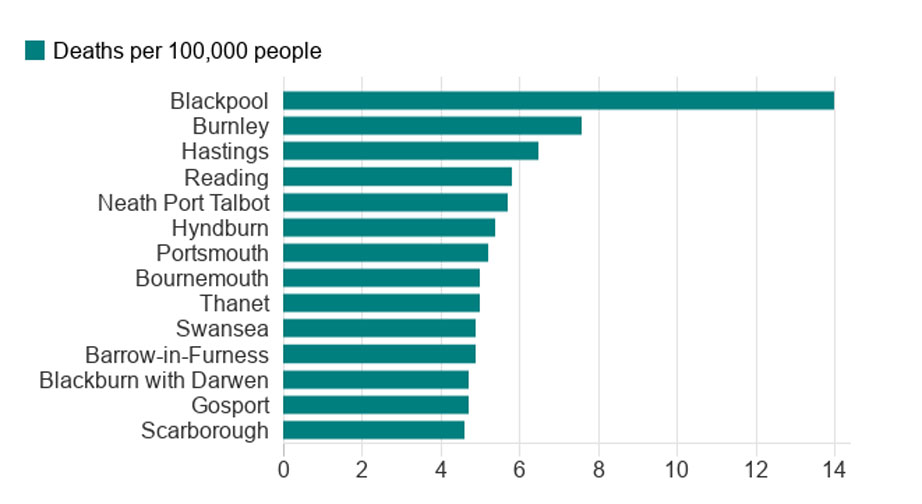 On both sides of the Atlantic addiction has consistently been reported as a symptom of poverty and deprivation. But it’s more complex than that. Poverty and deprivation are not the causes of addiction. They are a symptom of industrial decline, just as they were a symptom of the rapid process of industrialization itself. Addiction is much more strongly correlated with dislocation than poverty per se. Opioid addiction, like any addiction, is a response to the disequilibrium wrought by rapid social change.

It is not simply the most deprived boroughs of England which are most drug affected, but those that have changed the most radically without any meaningful way of life to replace those which have been lost. Addiction is most prevalent amongst populations that have lost their sense of purpose and identity. As if to make this point beyond obvious, the most common victims of death by overdose in England are single white men, living alone. The group who have arguably faced the largest relative amount of change in their statuses and roles.

So these coastal ‘brown towns’ are not brown because they are full of heroin. They are brown because they are full of rust. In such towns, the youth can only look for their meaning in distant worlds which are far from their own — worlds that they will never be able to attain any proximity to. This sense of social dislocation is the calling card of what French sociologist Émile Durkheim referred to as social anomie. Anomie is a state of societal derangement which breeds nihilism regardless of income level and which comes about by a rapid deconstruction of communally held values and beliefs.

We should be careful then, not to equate economic decline or deprivation itself with addiction. The link is not a direct one. Lack of economic prosperity must correlate with loss of roles and identities which were formerly clear and precise, in order to become corrosive. It is a lack of identification and increasing levels of community fragmentation that does the damage. It’s what happens when former steel workers, miners and shipbuilders no longer understand who they are — or to what they should aspire. Poverty in a life otherwise ram-packed with meaning is nothing to worry about for a species as robust as Homo sapiens. Poverty doesn’t cause addiction. Lack of meaning and purpose causes addiction.