How to Use Socratic Dialogue for Good Mental Health

People seem to suffer terribly from two basal emotions: anger and fear. I learnt this from working with addicted people and being one myself. But everyone suffers from them, not just addicts. And it’s fairly obvious why. These emotions are really ‘drives’. They evolved in a far flung epoch when emotions did not exist, and where every life form (including our progenitors) was reptilian.

These primeval survival drives (like the addictive state itself) are commanded by sub-cortical (non-thinking) processes. They are adaptive. (That means useful). But for many people (and addicted people in particular) fear and anger are at lethal levels. They are no longer adaptive and functional, but have become dysfunctional and un-useful.

Anger doesn’t always look like anger. Sometimes it manifests as passive-aggression, or lies hidden as a seething resentment. Ask any alcoholic and they will tell you that resentment is the “number one offender”. It causes more relapses than anything else. Allowing someone else to live “rent-free in your head” is no way exist. And sometimes fear is hidden by bravado. But we must recognize that both these states will remain – unless dislodged by a targeted action. Nobody wants to put their anger and fear under the microscope and bring them into the light of day. But the fact is we must if we want to grow.

Socrates said, ‘the unexamined life is not worth living’. He used the tool of dialogue to find the contradictions in any argument or position. This ‘friendly-interrogation’ has become known as Socratic Dialogue. It forms the backbone of our philosophical and scientific discourses. In its less friendly form it constitutes our legal system. In any kind of self-improvement work it is imperative that we have this kind of conversation with ourselves, or indeed, to be scrutinized in a similar fashion by trusted spiritual elders (and I use the term ‘spiritual’ loosely). Socratic dialogue basically consists of asking ourselves (or others) awkward questions. If we ask the right questions then eventually, things that seemed like an obvious conclusion to draw, become a lot more complex and nuanced.

In order to give you a practical illustration of Socratic dialogue at work, I will take you through one of my most pernicious resentments using a ‘five column inventory’.

In Fig. 1, we can see my resentment with my mentor Shay, and more widely, the banking system. (I have written about my mentor Shay in a previous article). As you may recall, I was pissed off with Shay for having the audacity to ask me not to rip off the bank when they mistakenly over-credited me to the tune of 900 pounds sterling. But after flailing around for a few days I realized the hopelessly untenable nature of my position. My faulty thinking was based on fear and insecurity (particularly around my finances). Having understood that it was my fear that was actually driving my behaviour and not any principled stance, I could then see ‘my part’ in it more clearly. Once I understood my part, I could then see the need to amend it, which I eventually did.

In modern psychotherapy there is an analogous technique which utilizes Socratic dialogue which is called ‘ABC’. This technique is often used in cognitive therapies (such as REBT, CT & CBT). It was (arguably) first developed in the 1950s by the psychologist Albert Ellis.

Ellis worked on the principle that humans disturb themselves unnecessarily with incessant self-talk which revolves (in unhealthy people at least) around unrealistic expectations and inflexible demands. As a tonic for dealing with these irrational belief systems, Ellis prescribed a radical state of acceptance across three different life areas:

Rather like Buddhist philosophy (and Stoic philosophy) Ellis promoted radical acceptance in order to ameliorate the emotional suffering which he believed was an inevitable part of the human condition. Regardless of how inevitable such feelings were, Ellis believed we could overcome them, because most of our unhappiness came from having judgmental thoughts about ourselves. These ‘self-downing’ thoughts (as he called them) were unhelpful because ultimately, they didn’t get us anywhere. Thus he designed thought experiments and behavioural assignments to mock such internal thought processes and reduce their power.

For example, in his famous ‘shame attacking’ exercises, Ellis would make students and therapy clients go out into the streets and call out the colour of passing cars or announce each stop loudly when they were on a busy commuter train. From such situations, his students and therapy clients learnt that nothing really bad happens when we do something embarrassing. The ground doesn’t open up and swallow us, although we might wish it would. We learn to overcome such useless, superfluous and limiting emotions like shame. Ellis believed that shame needed to be put in its place. If such things made us feel bad, he said, then they were no good and had to go. REBT (his therapeutic method) was basically Stoicism without the morality – Stoicism without the emphasis on ‘virtue’. (NOTE: I don’t personally believe that shame is a useless emotion, but Albert Ellis did).

First, we write down what activates us (A). Then we note what irrational beliefs (B’s) lie underneath that activator. Having done that we can see what the emotional and behavioural consequences (C’s) of those beliefs are. Finally, we are in a position to (D) dispute those beliefs, before finding an (E) effective new way of thinking and behaving.

In Fig. 2 I have recounted how I might have processed the same resentment with Shay, but using Ellis’ ABC method instead. (NOTE: I differ from Ellis in two ways. 1) I believe that shame can be a useful emotion, and 2) I take the existence of an objective moral code as a given.) 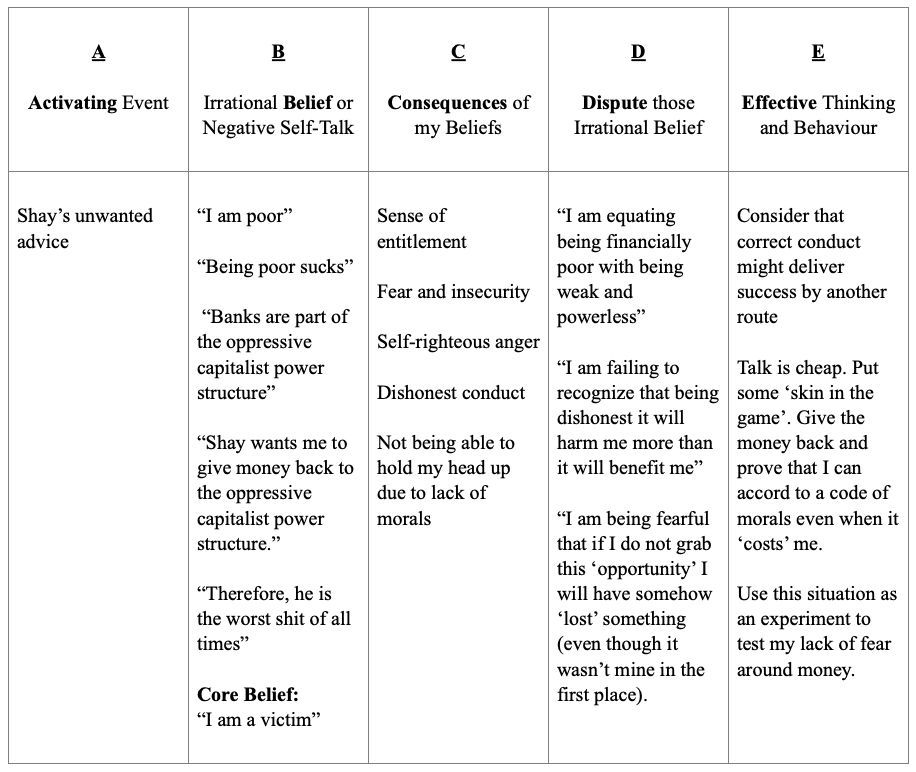 Having realized what was (A) activating me (namely, ‘losing’ money) I wrote down exactly what I was (B) believing about him and broke those beliefs down into specific ‘soundbites’ or what Ellis called ‘self-talk’. These soundbites are very revealing once you learn to identify them, and it can be fun to deliberately ridicule and satirize yourself as I have done here. Of course, I would never literally say things like “banks are part of the oppressive capitalist power structure.” If I did, then I would realize how stupid and childish they sound and would be forced to examine them. But the fact is underneath my more familiar internal dialogue there lay deeply held beliefs exactly like this. These beliefs could perhaps be more accurately described as ‘attitudes’, or ‘positions’. They are nearer to feelings than thoughts. Ellis called them ‘core philosophies’ or ‘core beliefs’. In my former years such erroneous core beliefs drove my dysfunctional behaviours and led me down the road to self-defeat time and time again. Of course, banks may be guilty of a great many things, but that is not the point. The point is that it led me nowhere. I floundered helplessly under the dubious luxury of self-righteousness. It was a victim mentality.

While we might argue that some of my thoughts were rational and objectively true, such as; “I am poor” the other thoughts that were automatically triggered by this initial thought were much more suspect. For example, “being poor means I’m a victim” is definitely a questionable leap of logic from the simple observation of “I am poor”. But without analysis, without questioning, how would I even have known that I was thinking such things. I would almost never have admitted to myself that I was a victim. To do so would be to admit that I was behaving in an ineffectual manner. But the fact is, my behaviours gave the game away, and under further investigation they revealed themselves in all their pathetic glory.

Another pioneer of psychotherapy that had a cognitive slant (a focus on irrational thoughts as the fountain of dysfunctional emoting) was Aaron Beck. Beck pioneered what came to be known as Cognitive Therapy (CT). Beck and Ellis founded their therapy styles (CT & REBT respectively) more or less simultaneously. CT focuses more on disproving the validity of the thought during the ABC exercise by rooting out ‘thought distortions’ – thoughts that are simply wrong, unrealistic, twisted or lacking in evidence. Below is a list of the most common thought distortions;

It is clear to see from my own example that I was using several of these thought distortions. For example, I was using ‘emotional reasoning’. This is also sometimes known as ‘feelings are facts’. The idea that because I feel a certain way, it must be true. The fact was, because I ‘felt’ like being poor was an injustice – I mistakenly believed that it MUST be true. In reality, it wasn’t the case. I was poor because I had been an addict for my entire twenties and couldn’t hold down a job.

I was also suffering from the ‘fallacy of fairness’. The belief that the world should be fair. Well it isn’t. Something everything psychologically mature adult must admit eventually.

Socrates had a point then, when he said that ‘the unexamined life is not worth living.’ Ellis’ techniques achieved the same end in the sense that they clearly identified the irrational thinking which often leads us into unconscious and toxic emoting, and which then in turn drives us into brutally self-defeating behaviours. If these things are to be overcome then we must engage an action, an effective new behaviour (E) to put them right. And we must base these new behaviours around an unconditional acceptance of ourselves, others and life. I accepted that the world was not fair, perhaps for the first time in my life. I accepted that I was poor, and that this might have something to do with me. This was a crucial insight which then allowed me to do things differently. In fact, this realization positively demanded that I do things differently – and perhaps that’s why I never wanted to see it before.

In the final analysis we see that always believing our feelings rather than critiquing them, always blaming others, and seeking change which is external to ourselves rather than internal, can never produce anything other than futile and ineffectual anger. We must subject ourselves to scrutiny and commit to actions which correct our course regardless of how uncomfortable this makes us feel in the short term. If you ever notice that you are feeling disturbed – perhaps you should ask yourself why! It’s a gift – an opportunity. Undoubtedly, lurking down there somewhere, is an unresolved fear. Something we are resisting. And when we stop resisting and start admitting and accepting, then ironically we become stronger.